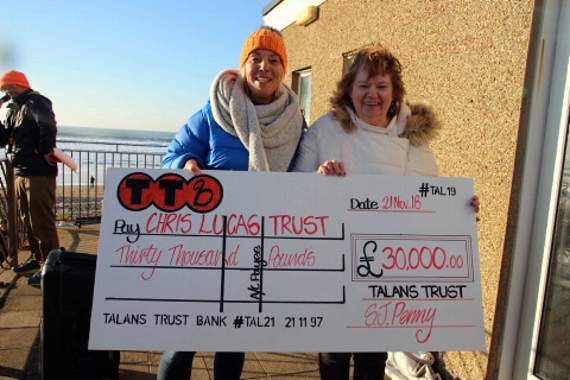 On Sunday, November 18 2018, we remembered Talan on what would have been the week of his 21st birthday by gathering together over 200 local runners, young and old. The Over 18s ran 21kms, and the under 18s ran 2.1km, with the sunshine and sparkling sea providing a wonderful backdrop.

The Bude & Stratton Post gave the event a wonderful write up and their photographer, Paul Hamlyn took this great photo of Sarah presenting a cheque for £30,000 to Lynn Lucas from the Chris Lucas Trust.

The event, organised by Bude-based charity Talan’s Trust, was a 21km multi-terrain run taking in Talan’s home, school and clubs that were part of his life, with the last six kms on the coast path looking out to the sea, which Talan loved.

The day started at 10am with the fun run, where 65 children ran 2.1km. The first boy home was Archie Whitefield and the first girl was Alice Atkinson, who came down from Gloucester with her family who all competed in the day’s events.

A warm up, led by Charlotte James from CJ Dance, was much enjoyed and set the atmosphere of fun as the competitors walked to the start, with the amazing backdrop of Crooklets beach. The sea was at its best — beautiful, clean, huge waves with bright blue sky and wall-to-wall sunshine all day.

The day’s event was ‘incredibly special’, an atmosphere like no other, made so by the fact that it is marshalled by over 50 marshals who all came back from last year to cheer the runners on. Music was played at several points to spur runners on and help them ignore aching legs!

Time keepers, marshals, cake bakers, soup makers and photographers all gave their time freely to help raise money for the ‘little charity with a lion’s heart’.

Sarah Penny, founder of Talan’s Trust and mother of Talan Penny, who died in 2017 after living with a rare form of cancer, said: “A special thank you to the committee of the trust, Simon and Nicola Hammond, Emma Bartrop, Rachel Ellis and Denise and Daryl Wellington. Also a massive thank you to Bude Scouts who were totally awesome, Vicky Innes who co-ordinated the food along with Claire Davies and numerous other people. Anything left over was taken to the Bude Food Bank.

“We also as a trust are one of the first to use biodegradable water cups at the drinks stations, supplied by the Happy Turtle Company — big thanks to them for Zoe’s help, and Avril from A Greener Bude. Also thank you to Jon Venner, my partner who does so much behind the scenes, and my daughter who helps with the social media!”

There was a very special race starter on the day — a little boy called Oscar came down from Birmingham with his mum and aunty, who ran the race, and his dad and uncle who supported all the participants. Oscar, who is four years old, had the same cancer Talan had, rhabdomyosarcoma, and is six months in remission. Sarah said: “We were thrilled to have him with us and see how well he is doing.”

Lynn Lucas from the Chris Lucas Trust again made the trip down from Northumberland to accept a cheque from Talan’s Trust for an amazing £30,000, which was raised in the last year.

The trust has gone from strength to strength and has had many fundraisers in the last year, the most recent before the run was a very special calendar launch, with photos by Clive Symm of Symages Photography. The calendar contains photos of the local groups Talan was part of — the rugby club and Bude Surf Club, featuring Talan’s friends and family in a beautiful calendar, which is £10 and available in several shops in Bude, including Ride It Cycles, Cornish Coasts, Furniture Redesigned, HPT Sport, P and P Interiors, And the Trading Post, Spencer Thorn Book Shop and The Cabin.

Sarah added: “Bude is such a special place and has supported us in the most amazing way. We have big plans for the future and have a website soon to go live, where we will let you know where the trust is heading. Thank you to all those who ran. See you next year, where we will do it all again — bigger and better, but a little shorter!”

No comments to show.